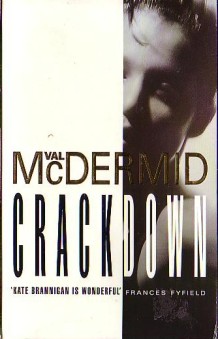 I really like Val McDermid’s sense of humor, at least I have every time I’ve heard her speak on a panel at a con. I bought a couple of her Brannigan books some time ago but didn’t get to them right away. Later I wondered why I waited.

Kate Brannigan and her lover Richard are working for a car company doing an investigation of several dealers whom they suspect of running a financing scam. One of the cars Richard “bought” is stolen before it can be returned to the company but Richard finds the car a day or two later, with dealer plates on it. He takes off the dealer plates (what was he thinking?) and drives the car home, or tries to. He’s stopped in the “stolen car” and the cops find two kilos of crack in the trunk. Bad news. I didn’t find Richard to be a sympathetic character at all and so the only thing of interest for me was how Kate would find out who’d stolen the car and was carrying the drugs when Richard repo’d the ride.

This book was good, though I didn’t like it as much as the first in the series, nor as much as some of the author’s later standalone books. Still, McDermid is a fine writer, and any McDermid is better than none. She’s done better work since, both her Tony Hill series and stand alone novels.