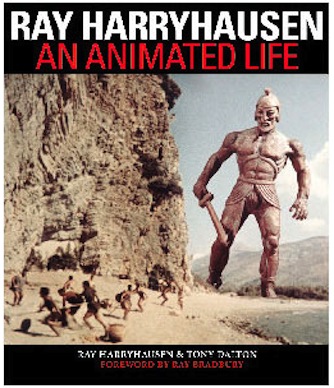 This one is only eleven years old, but the contents cover things much older.

Ray Harryhausen took stop-motion animation to it’s zenith. I’ve always loved stop-motion films, from the original King Kong to Clash of the Titans, which was Harryhausen’s final film. I never believed the creatures he animated one frame at a time were real, as he may have hoped, but I thought they were very cool and got a huge kick out of watching the films. I still do and have his best on DVD.

This book begins with some early biographical information but the primary focus is on filmmaking, providing a film-by-film discussion of the plots, characters and mostly the effects and techniques Harryhausen used – and often invented – throughout his career. Here’s an example. Harryhausen is explaining how a scene from The 7th Voyage of Sinbad was created.

“For the sequence in which Sinbad is ‘picked up’ by the foot and lifted out of the treasure room, we had Kerwin [Mathews, the actor playing Sinbad] hoisted up on wires during the location photography. This was then used as a rear projection plate for the animation with the Cyclops. In my studio I built a miniature boot that I inserted in the model Cyclops’ hand, carefully positioning it in front of the rear-projected image of the real boot. I then animated the model to follow the line of Kerwin’s real boot. The end result is the Cyclops appears to lift Kerwin. A traveling matt was used in the foreground to add depth.”

There are many stills, storyboards, sketches and drawings showing the derivation of scenes as well as accounts of the script changes made from initial concept to final shooting. A filmography and glossary are included. A fascinating (for me, anyway) look at the work of a man greatly revered for his ingenuity and creativity in the art of stop-motion animation, or “Dynamation” to use the term he coined.

Enjoying life in Portland, OR
View all posts by Rick Robinson →
This entry was posted in Friday Forgotten Books, Non-fiction. Bookmark the permalink.

7 Responses to ffb: An Animated Life