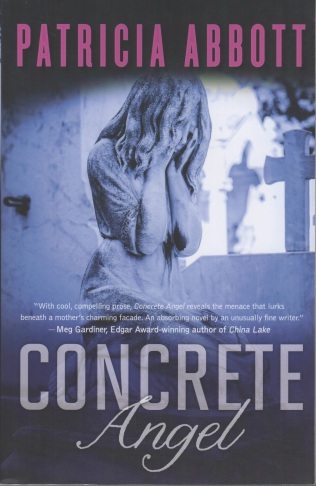 “When I was twelve, my mother shot a soda-pop salesman she’d known less than eight hours.”

Thus begins Patricia Abbott’s novel Concrete Angel, the story of a woman whose morals have long since vanished, replaced by rationalization, greed, self-absorption. The twelve year old daughter in the opening line is just along for the ride, and a bumpy ride it is.

This is Patricia Abbott’s first novel. After writing short stories for years, she felt it was time to go with the long form, and she’s done a fine job of it. Was it difficult? Her answer, in part:

“Very difficult, indeed. In a novel you have to hang out with your characters for a long time. You have to create more than a couple of characters, too. They have to interact with the world, go places, think things. It’s not just about this one moment in time. Most short stories take place in an hour or two. Perhaps a day. But a novel…”

Eve Moran had a happy marriage, a daughter to be proud of, a good life. But she had always wanted things. Like a Magpie, if she sees it, wants it, she takes it. Not that she needs these things, but she likes stealing and having them. She puts them in boxes, puts the boxes in storage units. Often she never looks at them again, but she continues to want, and take. She lies, cheats, steals, swindles with little or no thought to consequences.

That’s the crime in the book; Eve’s ongoing criminal activities. But the way she treats and raises her daughter is also the crime in the book. The author labels the book domestic suspense. Character-driven, a bit noirish in it’s foretelling of doom, full of conflicts, poor choices, realizations, promises and failures, this book will pull the reader along on the fascinating, if uncomfortable journey of Eve, her daughter Christine and the choices they make.

Several times while reading this I was reminded of Elizabeth Graver’s wonderful The Honey Thief, though in that book it’s the daughter who does the stealing. Both books are beautifully written, perceptive and insightful. Both have strong character interactions. Both are literary gems.

The inspiration for Concrete Angel was a newspaper story about a mother and daughter charged with various credit-card crimes and outright theft. The daughter said in court that her mother made her do it. Abbott says:

“…that got me to thinking, under what circumstances could a mother make someone commit a crime?”

One possibility presented by the author in this worthy novel.

Enjoying life in Portland, OR
View all posts by Richard Robinson →
This entry was posted in Books & Reading, literary fiction. Bookmark the permalink.