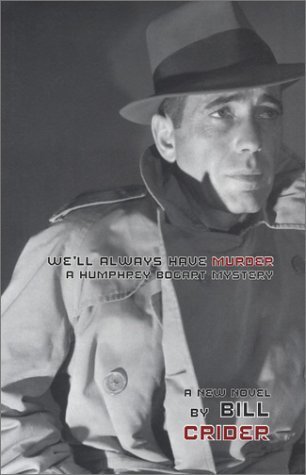 “I was dreaming about something that involved me, Rita Hayworth and a tube of Burma Shave when the ringing phone jarred me awake.”

Terry Scott is a fixer for Warner Brothers Studios. When something potentially embarrassing or “difficult” for the studio or one of it’s stars needs to be quietly solved, Jack Warner calls Scott and Scott fixes things. He’s on retainer to the studio though that’s not enough to pay the rent so he’s also the head and sole employee of Scott Detective Agency with an office in L.A. “and not the best part of town at that”. He’s called to the studio and when he gets to Warner’s office, Humphrey Bogart is there. Seems Frank Burleson, a snoop for rival studio Superior Pictures, may be trying to blackmail Bogey. Warner wants it stopped. Bogey wants to help.

Scott and Bogart play off each other as they attempt to solve the case, they get along and enjoy giving each other the needle. Bogey is Scott’s entry to places he ordinarily couldn’t go and the two go to restaurants, clubs and movies studios, meeting some stars along the way (for example, breakfast at Romanov’s with Peter Lorre). There are some familiar plot elements to anyone who has read Chandler or seen the Warner Brothers films of the time; alcoholic has-been star, slick gangster club owner, drinking, shooting, it’s all here. When reading this I visualized the scenes in black and white. Very enjoyable. I’ve long hoped there would be more of these, but have so far been disappointed. I’m still hoping.

Enjoying life in Portland, OR
View all posts by Richard Robinson →
This entry was posted in Friday Forgotten Books, Mystery. Bookmark the permalink.

13 Responses to ffb: We’ll Always Have Murder by Bill Crider