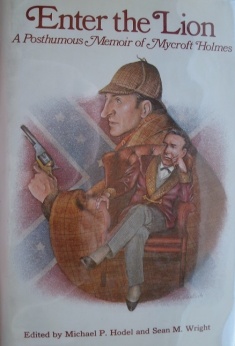 slightly wonky image from the ‘net

Enter the Lion by Michael P. Hodel and Sean M. Wright, Hawthorn, 1979, hardcover, mystery featuring Mycroft & Sherlock Holmes This is a pretty fair pastiche, starring Mycroft Holmes rather than Sherlock, and told in the first person. In this tale, Mycroft is a clerk in the Foreign Office and is visited by a group of men and women presenting themselves as representatives of the State of Alabama. In fact it is their intent to gain the help of England to overthrow the Yankee government and reestablish slavery. At this point in his career, Mycroft is working for Jerrold Moriarity, father of the infamous professor who becomes Sherlock’s nemesis. As expected, plans are dashed and the plot overthrown, while a young Mycroft begins to fall – or thinks he is – in love with one of the plotters. The seeds of enmity between Professor Moriarity and Sherlock Holmes are sown here. A good read and nice to see so much of Mycroft.

Enjoying life in Portland, OR
View all posts by Rick Robinson →
This entry was posted in Books & Reading, Mystery. Bookmark the permalink.

12 Responses to ffb: Enter the Lion